I Want To Murder Mrs. Antbottom

I have a confession to make. I am suffering from homicidal ideation. I want to commit murder. Although I couldn't really do it, I find myself fantasizing about murdering this lady often. How would she go? Maybe a bus "accident"? Or maybe she would just happen to eat a bad apple? I certainly wouldn't stab her with a pencil, that would be too obvious. I'd have to make it look like an accident. I am not a violent person, but sometimes I feel like this woman has got to go. She never stops talking. Her voice is high pitched. She's an erratic driver. Sometimes I just can't stand the bitch.

The weird thing is, I know one day I will miss Mrs. Antbottom. When she is gone I'll remember her fondly and I'll smile. She's kind of like a eccentric old Aunt; you cringe when you hear that she will be present at a family gathering, but once she's gone for good you kind of wish you had appreciated her while she was still around.

Such is the phenomenon of engaging in pretend play with our children. We feel guilty admitting it, but we don't always love role playing for hours on end, especially when we are being fed lines like an understudy. Pretend play is essential for cognitive and social emotional development and it really is a relatively short phase of childhood. We know that, so we encourage it, at times looking on in amusement while our kids create their own worlds, and at other times becoming a play mate, morphing in to a character in the game. I find more often than not, I am the play mate, and I find more often than I would like to admit, thirty minutes on the floor playing Mrs. Antbottom has me feeling slightly antsy. My mind wanders and then it wanders to dark places. What is wrong with me that I am not, you know, enjoying every moment? What is wrong with me that I have a quirky wonderful, smart, creative kid and sometimes I would rather not play with him? What's wrong with me quite frankly, is that I am an adult.

Since I am an avid blog reader and also have friends in real life, I know that I am not alone. We as parents, have a cemented idea of what we SHOULD be doing. These ideas come from a lot of sources - social media, the latest pop psychology study, people in our lives, and most often our own internal dialogue. Play is important. We are our children's first playmates and first teachers. Should we play with them? Sure. Should we expect ourselves to be bubbling over with genuine excitement when we hear the words, "Can you play with me?" I would say this falls under the unrealistic expectations category.

This brings me back to Mrs. Antbottom. I created Mrs. Antbottom around this time last year in an attempt to ease my son's apprehension about starting kindergarten. Mrs. Antbottom is a jolly, energetic teacher who tirelessly answers questions. Mrs. Antbottom also talks in a high pitched squeaky voice and takes her class on many enriching field trips to factories, fire houses, airports, amusement parks, and houses all built by the great Mr. Aiden. Mrs. Antbottom's students are precocious inquisitive little monsters. They ask a lot of questions and they often need to be corrected. I play the parts of both Mrs. Antbottom and the students. There is a whole script involved and it only varies slightly from day to day. What started out as a story morphed into a game. This game is great because it allows for a lot of old fashioned on the floor imaginative play. It also allows for role playing and social stories. It's cute, and I am sure we will both remember our Mrs. Antbottom game fondly.

That said, sometimes when I hear the words, "Can we play Mrs. Antbottom now?" I wonder if I could get away with murder. I know, terrible, right? June Cleaver never grew tired of engaging in pretend play with her children. Probably because she never did it. She was too busy baking muffins while her kids played outside with tin cans. So, it is tough for me to admit it, but sometimes I want to murder Mrs. Antbottom. I won't though because I know one day when I don't expect it, she'll pack up her Lincoln logs and lesson plans and drive her big plastic school bus away for the last time, her high pitched voice forever silenced. Sometimes it's hard to imagine, but I know when this day comes I will miss Mrs. Antbottom. I will want her to come back and visit but she won't.

I won't murder Mrs. Antbottom. I'll enjoy her while she's here and I when I really just can't enjoy that bubbly old hag, I'll tolerate her. Besides, I look terrible in orange. 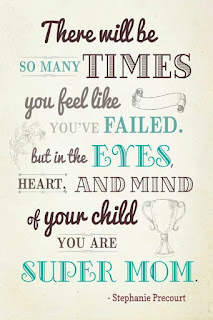