When My Son with Autism asked, "Mom, Do I Have a Disability?"

I knew the question would come, in one form or another. I thought I was prepared. I'd read countless articles, met with therapists, had late night discussions with my husband. My search history is filled with variations of the question "How do I tell my child he has autism?" This type of preparation is not unique to special needs parents, although the topics may be. Eventually, as a responsible parent, you know you will have to have uncomfortable conversations with your kids. Unfortunately, mumbling awkwardly doesn't satisfy when your child asks you an important, deep philosophical question in the drive through line or as you're drifting off to sleep. You don't know exactly when the moment will come but you know it's inevitable, so you prepare.

When I became a parent I knew I would face  the big questions. Yet it's not the sex talk that's been on my mind (although that will come). For my husband and I, since D-day the questions hasn't been if we tell our son he's autistic, but when and how. These questions are individualized and unique to the family situation; I don't intend for this post to be a piece of advice. I'm no expert; I'm just a mom navigating without a road map.

I remember my husband and I watching the show Parenthood when out oldest was a baby. One of the characters, a young boy named Max, is diagnosed with Asperger Syndrome. Max's well-meaning parents do not tell him about his diagnosis, although they do seek the help of a behavior aide. Eventually, Max overhears a heated conversation between his dad and uncle during which his diagnosis is revealed. Max is angry, confused, and devastated while his parents run major damage control. My husband and I rather sanctimoniously agreed that we "would never" keep something like that from our child. Turns out revealing this information isn't so straight forward.

Our son also has high functioning autism. When he was diagnosed, we felt that it was important not to hide the diagnosis from him as we didn't ever want to make it feel like it was some kind of shameful secret. Again, our personal situation. The other edge of the sword? Our son also lives with anxiety disorder NOS. He is very sensitive and he cares what people think. He is naturally self conscious. He perseverates. How would we tell him about his autism without him over-identifying with it? How would we keep him from feeling like something was "wrong" with him while at the same time circumventing the trap of minimizing the very real difficulties he faces as a result of his autism?

The consensus of my research indicated that when a child begins asking questions or making observations about a topic, you know they are ready for an explanation. Obviously, the depth of the explanation will be adjusted based on the child's age and developmental level, The rational is that once a child is observant enough to begin asking questions giving them an explanation is far better than leaving them to ruminate (and believe me, our child ruminates!) and come up with their own version of reality.

I first discovered this information when my research history contained variations of the question: "How to talk to kids about a parent's depression?" Interestingly, when this question came up, ("Mommy why do you take that medicine every day? Why do you have to go to the doctor so often? Are you sick?") I was surprised how readily my son accepted my explanation. While I thought was being discreet, he noticed the pill bottles on the counter and the frequent doctor appointments and worried I was sick. While it was not a conversation I ever wanted to have, I explained to him that yes, I am sick, but my sickness is in my brain so you can't see it. But, it's okay because my medicine helps me and I go to the doctor so often because he helps make sure my medicine is making me better, I think he said something like, "Oh, okay. Can I go play Minecraft now?"

So, when the day came, I figured I'd be prepared. It turns out some things you just can't prepare for. Life is not an exam to be studied for. If only.

We were perusing the science museum in San Diego. My husband was with our youngest playing Legos while I trailed A and my niece through the genetics display. I was thinking about something important like where we were going to go for dinner, when I noticed my son staring intently at a chart about genetic disorders. He was uncharacteristically quiet and then he turned to me and said, "Mom, do I have a disability?"

I deflected. I asked him what he thought and why he asked that. That night during tuck in  when most of our heart to heart discussions occur, I readdressed his question. I asked him what he'd meant earlier when he asked if he had a disability. He replied, "Well, I was just wondering, because you know how I'm different and stuff?"

As badly as I wanted to appease him with some "different is not less" "be who you are" "we are all unique" platitudes, I knew his question was deeper than that. He's deeper that that. The time had come. Except all preparation went out the window. There's no script for this type of thing; there just isn't. I took a deep breath and told him he had something called autism spectrum disorder. I asked if he knew what that was and he shook his head. Now, the hard part. A label is one thing, but autism (like any condition) is more than a collection of bullet point symptoms. I told him it meant in some ways his brain works differently than a lot of other people. It means he has very special gifts like being able to remember things and being able to learn so many facts of things he is interested in. I told him that it also means certain things are harder for him, like doing something new, loud, noisy areas, or coping with surprises/changes in plans.

He nodded. I told him we would do everything we could to help him with the things that are more difficult and continue to encourage him in the things that are strengths.I told him that the world needs people with all types of brains and that we were proud of him and loved him just the way he was. He asked me if other people have autism or is it just him? I said that many people have autism, in fact a few people he knows! We talked about other "disabilities." I prefer special needs to the term "disability". I know it's just semantics, but it's the term I'm most comfortable using. He asked me if everyone has a disability. I said no, but everyone does have things that they deal with that are hard for them, and often you can;t see it, that;s why it's always important to be kind.

He yawned and rolled over, which is usually the signal that his mind is finally slowing down for sleep. I asked a question of my own. "How do you feel about learning you have autism?"

With his back still to me, he shrugged one shoulder in that eerie teeager-ish way of his. "I don't really care. I mean, I don't think it really matters."

Out of the mouth of a seven year old. I couldn't have said it better myself. In moments he was asleep and "the talk" was over. But I'm sure it's not over. These talks evolve but don't really end. At least I have a few years before the big sex talk, right. RIGHT? 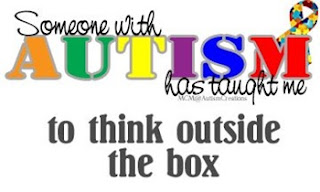 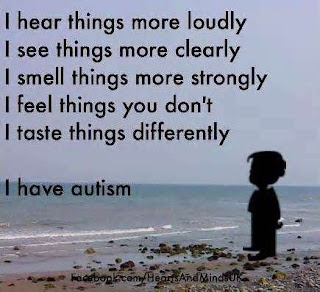