The Never Ending Cycle of Suicide

Within the last month, I have been notified by my daughter's schools (one in high school, one in college) of a student taking their own life. Each time I hear of a suicide my heart aches; it aches for the person who hurt so terribly that, for them, it was the only answer, and it aches for all those whose lives will be forever changed by their absence.

It's important for us to stay vigilant; to monitor the mental health of those around us. Even those who appear happy on the outside could be struggling and you might be the lifeline they so desperately need but are reluctant to pursue.

One other thing to keep in mind: people make mistakes. None of us are innocent of making poor choices at some point or points in our life. Judging someone, pointing fingers, condemning them, hating on them because they did something wrong (no matter how terrible it was) accomplishes nothing except show what an unforgiving, non-empathetic, non-altruistic society we are moving towards. Being empathetic rather than hurtful proves they are more than their mistakes and their life is valuable, important and worth fighting for.

Those at the highest risk of suicide are the following:

1. Teens - This is obvious. Hormones, school struggles, family dysfunction, depression. There are so many reasons why teens contemplate or commit suicide. They are going through significant body changes causing unattractive breakouts, oily hair, body odor and so on. Because of these changes, they may be the subject of bullying causing their self-esteem to plummet. They may struggle with friendships, making them feel unliked and insignificant. They may deal with stressful family situations that they keep hidden, or they could be experiencing a true clinical depression that they just don't understand.

2. Those who have suffered severe physical or emotional trauma. Perhaps a close family member dies, a crime was committed against them, or they were injured physically in an accident. Also, losing a job, a good friend or financial stability can also have a direct impact. These traumas can take people to a dark place where they feel they can't escape.

3. Those who suffer from addiction. Whether someone is addicted to drugs, alcohol or some other addiction that runs their life, it can cause them to want out with as little pain as possible. Also, drugs and alcohol take away inhibitions making it easier to act out on suicidal thoughts.

5. A friend or family member has committed suicide. Oddly, suicide can be contagious. It has sometimes been romanticized as well as sensationalized making it look appealing.

Some signs to be aware of:

Look for these behaviors:

* Increased use of alcohol or drugs
* Looking for ways to kill themselves; talking about how they would do it
* Acting recklessly
* Isolating themselves from family and friends
* Drastic change in sleeping habits - sleeping too much or too little
* Gives away prized possessions
* Becomes aggressive
(info found on www.afsp.org)

Also, keep an eye out for those who may appear overly happy. I'm not saying that being overly happy is a behavior that leads to suicide, but it is a way for those who hurt inside to hide. Sometimes, those who seem to have it all together and seem so incredibly happy are only using that to mask the pain that is manifesting itself on the inside. 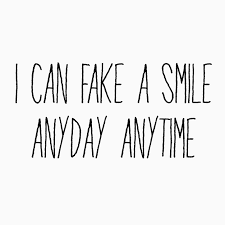 The big question is what to do if you think your loved one is suffering from some of these symptoms. It's obvious that help is needed and as soon as possible, but that may not be welcomed by the one who is suffering. If they refuse help, you need to at least keep the lines of communication open. Always guide with a gentle hand. Forcing someone to do something they don't want to do will probably only cause them to become more resistant. If they won't get help, you need to reach out and get help from a professional so they can guide you in how to handle your friend or family member. There are a number of websites and toll-free phone numbers that can help you immediately.

I am not an expert on suicide, and I encourage you to do your own research and gather your own tools for prevention. But, I must share with you some advice based on an experience I had yesterday.

I went to order my daughter some food at a local fast food restaurant and started to take a seat on the bench to wait for my order. I already had my phone in hand, ready to check out Facebook and emails when an older woman made a spectacle of herself while trying to sit down on the bench next to me. My first thought was, "please don't talk to me, please, please, please!" but, of course, she did. She joked about her unsteadiness and then she introduced herself, telling me to shake her hand harder. "No, squeeze harder. C'mon, you can squeeze harder!" she said. She then complimented me on my blouse and told me how important it was to her to make sure everyone she met knew she noticed something nice about them. She made this her mission. She believed that too often, we ignore those around us, not even saying hello when time and space allow for it, and I have to agree. I can't tell you how many times I would look away to avoid saying hello to a stranger. After I had left, I thought about what she said, and it really resonated with me. 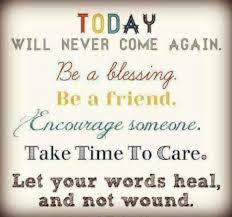 What if we all spent more time with our eyes open to those around us? What if we said the one thing that a person who was struggling, needed to hear? A kind compliment, a helping hand - something that says I CARE ABOUT YOU. Think back to the last time someone complimented you on something you wore - your hair, your smile or a great job you completed. Didn't it make you feel good? And what if that person was a complete stranger? Wouldn't the compliment heighten that feeling more, knowing someone who doesn't know you, noticed something special about you?

I challenge you to reach out. Try finding something special in those around you and pay homage to it. You never know when that little act could have such an enormous ripple effect and change the direction of someone's life for the better. Sometimes it's the little things that make the biggest difference.

If you're in for the challenge, post yes in the comments. Please share your experience with us as well! I would love to hear how people reacted to your positivity! 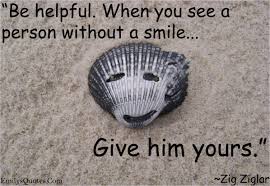