Hello, My Name Is: Mean Mom 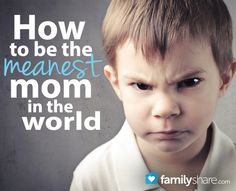 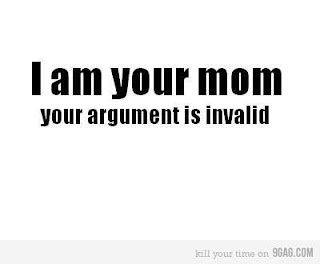 My now three year old went through a lovely (fortunately passing) phase of telling me, "You're mean" every five minutes or so. I would tell him that hurt my feelings because I didn't want him going around calling people mean (although it seemed reserved for his parents and brother). Really, it didn't hurt my feelings at all. Nope, not in the least

Every time my child said, "Your mean" with his mouth turned down in a disapproving frown and his little index finger pointed in accusation, sure I corrected him. I also thought,

My transgressions were predictable; my meanness ordinary. I made him turn off the TV. I brushed his teeth. I didn't let him run out of the house in only a t-shirt. (Well, okay, not intentionally.) I told him to clean up his toys, I asked him to please not poop in his pants, I put him in the bathtub, I took him out of the bath tube. You get the idea.

I'm not offended because in this world of permissive fragile snowflake parenting, I am mean. I'm downright MommyfuckingDearest. When my kids tell me I'm being mean that tells me I'm doing it right. Now that my oldest is seven, my meanness needs to be a little more creative, and also more public. Often random children witness my meanness and don't hesitate to inform me that their mom is way nicer but doesn't have as good of snacks and by the way they're hungry. What world do we live in where a kid has the balls to question someone else's parenting? Don't get me wrong my kid has done it too. Maybe a good chunk of the current problems with violence have to do with a loss of respect for authority, but I was taught by nuns so I may be biased.

So what is a mean mom to do? I'll tell you. I wear my mean mom badge with pride. In fact it has become a self fulfilling prophecy of sorts; the ultimate argument ender. My seven year old argues so much I think he may have a future as a lawyer. I remember trying to argue with my dad. It went like this:

"Because I said so."

"Well, I'm not Sally's parents. If Sally jumped off a bridge would you jump, too?"

I mean, how do you argue with that? As you can tell, I learned from the best, but these days kids want a damn explanation for everything. Nevermind all of the parenting propaganda. Don't yell, it will cause self esteem issues! Don't put your kid in the corner, it will cause abandonment issues! Don't spank unless you want to go to jail. Don't say, "Because I said so." This threatens kids' autonomy. Take the time to explain to Sammy why you don't feel it is a good idea for him to pour water on the carpet. Don't get me wrong, why can be a valid question and I have no proble giving my kids reasons behind my rules. But it is not a negotiation. Whether or not they agree with my reasons or think they are dumbstupid is completely irrelevant to me. Do I care about my kids' feelings? Yes, yes I do. Do I care about their feeling toward my rules? Nope. Sometimes a well placed "Because I said so" or "Because I'm the parent" is a valid answer. My house is not a democracy. I have had some recent conversations with my seven year old about the fairness (or lack or fairness) of rules. I think my dad would be proud.

A: "What?! That is so unfair Mom! All of the other kids in the neighborhood are still out riding their bikes."

Me: "Well, their moms are nicer than me."

Me: "Because you're seven and you have no way to pay for it."

Me: "Well, I was eighteen when I got my first phone."

A: "You're parents were mean."

I'll be honest, it takes confidence to parent this way and confidence doesn't always come naturally to me. Truth be told, becoming a parent challenged me and continues to challenge me to be confident in my parenting decisions. When I'm not, I sure as hell better look like I am. My parents were, or at least seemed to be. They didn't give wto shits about what the Jones were doing. My parents were MEAN. They were much meaner than my friend with the cool parents. They didn't let us smoke cigarettes on the back porch, they didn't sneak us bottles of Smirnoff Ice, and they didn't even let us go to "that one guy's" house. We wanted to go to that one guy's house because his parents were nice and left him the hell alone. Last I heard he was in jail. So, yes my parents were mean. Thank God.

Next time your child asks "Why" or "Why not" have the confidence to play the mean card.

Friend: "How come your Mom won't let you ride your bike without a helmet, play with me in your room with the door closed, or post YouTube videos?

Me: "Oh I couldn't help over hearing your question and I am all for answering why. I wouldn't want to make you feel like your questions aren't valid. It's because I'm mean. 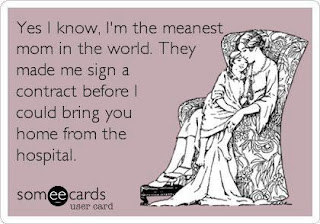 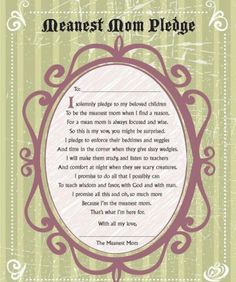