Man, I am on a roll this week. That's what happens when you don't leave your house. Boredom is the great motivator. Anyway, as we all know today is Random Thoughts Thursday, my personal favorite because it takes no organization. Today I am going to share some of my own myths and facts about having boys.

Boys are drama free. Myth
I heard this one a lot when I was pregnant with my first son, mostly from women with daughters. "Oh, you are so lucky! Boys are so much easier! No drama!" Now I am so lucky, and as far as boys being easier I don't have daughters so I have no idea if that is true or not. One thing I can assure you of, though, is the fact that boys are NOT drama free. At least mine aren't. My five year old alone could put any girl's dramatic performance to shame. Here are some dramatic quotes I have heard from him in the last week:

"Why don't you do what I want for a change?" (This after I had taken him bowling, rented Despicable Me, and let him have popcorn for dinner.)

"My life would be better if I could just watch another show."

"Why isn't anyone playing with me? Can you please stop doing the dishes and just play with me? What's more important me or the dishes?"

"I had the truck first, you bad brother!"

"Mom, he's touching me!"
and just this morning: "Winter is the worst season of my life."

My two year old? He has perfected the fake cry. The fake cry is so over acted that I usually have to leave the room so he doesn't see me laughing. You can't laugh in your crying kid's face even if the cry is fake.

Your bathroom will never be clean again. True.
At least until they move out. I thought I was very fortunate when my oldest basically potty trained himself at two and a half. Really, I didn't do much. However, three years later and he still forgets to lift the seat, or wipe, or flush, or all of the above. He also occasionally gets distracted and turns to look at something midstream. It's not like I redecorate my bathroom, so I can't imagine what he needs to look at that can't wait a few second. The best is when he pees on the toilet seat and then closes the lid. I am constantly saying, "Flush and wash!" My two year old has no concept of potty training, but I think that may be a good thing. Don't even get me started on the soap and toothpaste all over the sink and counter. My five year old has a sensitivity to food dyes which means we have to buy a certain kind of dye free toothpaste which is approximately three times the cost of regular toothpaste. Approximately forty percent of it winds up smeared all over the counter and mirror. Isn't it great when kids learn to brush their teeth themselves? This brings me to my next point...

Boys are messy. True.
They spill things. They get food everywhere except in their mouths. They wipe hands and noses on shirts, carpets, and couches. I wonder why all of my clothes are stained. Sometimes I think my boys look at me and see a giant walking napkin or tissue. If there is a mud puddle they will jump, sit and roll in it. Don't fight it. Just stock up on galoshes and bubble bath.

Boys Don't Care What They Wear. Myth.
My two year old wants to wear "choo choo train SHIRT!!!!!!" This last until breakfast when he squeezes his tube of strawberry yogurt all over his choo choo train shirt. Whoever thought those yogurt squeeze tubes were a convenient alternative to a spoon didn't have boys. At this point I can clean up the yogurt as best I can and move on, or I can add the shirt to the laundry pile and listen to, "No, I want wear CHOO CHOO TRAIN SHIIIIIRRRRRTTTTT!!!!!!!" Did I mention the drama? My five year old is a fashion non conformist. He insists on wearing his boots with his shorts in the summer. This is one of those pick your battles situations. At this point in my parenting career I am used to nosy strangers giving me disapproving looks. He has also gone to school without wearing underwear, unbeknowest to me. Isn't it great when they can dress themselves?

Boys Are Ruff and Tumble. True. And False.
An assumption I heard when I was pregnant with my second son was that I already had a boy so I knew what to expect. My boys are night and day. My oldest is intuitive, creative, and cautious. He can sit on the floor for hours building elaborate neighborhoods with his blocks and Lincoln Logs. He also struggles with separation. When he was a toddler he would stand next to me observing the other little boys climbing on and jumping off the structures. My youngest never stops moving. He climbs things. He runs at life full throttle. He takes off without looking back to see if I am following him. He falls down and bounces back up without missing a beat. I spend a lot of time saying, "Get down!" and "Get back here!" They are both obsessed with vehicles, though. With my oldest it is specifically garbage trucks and construction vehicles while his brother loves trains, trucks, cars, school buses, airplanes, and boats. I love both of my children equally but not the same. I love both of their little individual unique personalities.

You Will Become Familiar With Your Local Pediatric Emergency Room. True.
Boys fall down stairs. They fall off sleds and bikes. They attempt to eat coins. The literally run into walls. Ironically it is my not so ruff and tumble boy who has landed in the emergency room with a head injury.

Boys Think Potty Talk Is Funny. True.
Boys find a way to work the word "poop" into every day conversation. Sometimes they will just randomly yell it out. In a restaurant. And then laugh hysterically. It never gets old. They also like to rewrite sons using the word. Example: "Old McDonald had some poop. Ey I Ey I Poop! With a poop poop here and a poop poop there... Hahahahahahaha!!!!!!"If you want to keep your sanity you would do well to ignore it. The more you show annoyance the funnier it will become. Believe me, I learned the hard way.

You Will Want A Girl. Myth.
I mean you might want a girl. As for me, I don't not want a girls, but I am perfectly happy with my two boys and I would be ecstatic to have another boy. Really, if I am fortunate enough to have a third child I couldn't care less about the gender. I honestly don't get the whole gender disappointment thing.  If you give birth to a healthy baby you have already won the genetic lottery. Besides, why is the question, "So are you trying for a girl?" appropriate? How does one exactly try for a girl? Don't answer that. When I was pregnant with my second I got, "Are you hoping for a girl this time?" I don't know, are you hoping to get a lukewarm decaf coffee thrown in your face?

You Will Not Know How To Parent A Child of the Opposite Gender. Myth.
Kids are all unique. Sometimes it is more difficult to parent a child similar to you than one who is nothing like you. Either way. you will parent each child a little differently and each will be a challenge in some ways, and easy in some ways, regardless of gender. I was a tomboy growing up. I climbed trees, wore ripped jeans, and hated dresses. If I have a girl I am not sure what I will do with the whole brushing hair and coordinating outfits thing, but I'll learn.

No Woman Will Ever Be Good Enough. True.
We wish we could pick the people our kids end up with. I am pretty far from that right now, but one day they will bring girls home and I will be nice. On the upside, this perspective should help you understand your own mother in law. If she is good to you like mine is to me, count your blessings. Whether your mother in law hates you or loves you she did have to accept you. I mean, you weaseled your way into her son's heart, you jerk.

You Will Get Lots of Love. True.
I love having boys. I love have fellow mom of boys friends. I love all of the cars and truck lying around. Except when I trip on them. I hope I am up to the challenge of raising confident, curious, compassionate, strong, independent, sensitive men. 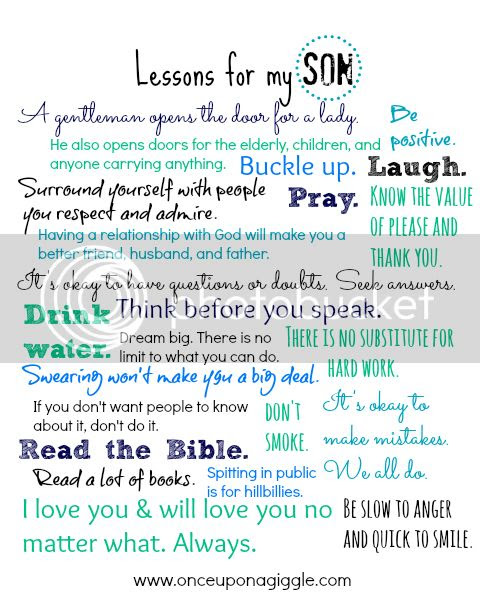 Email ThisBlogThis!Share to TwitterShare to FacebookShare to Pinterest
Labels: Boys, Truth about Boys