I may have mentioned this before, but I don't like being stuck in the house with kids. It is kind of like prison but with better coffee, and less time to drink said coffee. No, I have never been to prison but I have read Orange Is The New Black so you see I am an expert. Nonetheless, I am ready to join Jan on a federal prison vacation right about now. I think we would make pretty good partners in crime.

I may also have mentioned Murphy's Law before. Illness strikes at really inopportune times. My five year old is a bit of a hypochondriac. Every day he is "sick" with a long litany of complaints. His tummy doesn't feel good, his leg hurts, his arm hurts, his nose hurts, he needs crutches, he has a virus..... you get the picture. I don't even think he's always faking it, but clearly he has a lot of psychosomatic complaints. Remember the boy who cried wolf? The villagers were very concerned the first two times he insisted that he saw a wolf in the field, but eventually they tuned him out. Yesterday  he had a fairly good morning as our mornings go. His buddy was waiting for him at the school doors and they stood there chatting about lost teeth like two old ladies before I finally ushered them into the building. The principal is so sweet and cheerful and she was finding their conversation so cute that I think she was inclined to let the little truants stand outside chatting all day. Anyhow, he walked into the building without me which is a monumental accomplishment for us, and I happily went on to Bible study where I could dump my other kid...I mean place my other child in a loving, educational based nursery for some important socialization and graham cracker eating. Two hours later I returned for kindergarten pick up. The teacher's aide brought Aiden out to the car looking like a puppy that had been out in the rain. And eaten something out of the garbage. I asked what was wrong and the aide told me with a very sad face that he didn't seem to be feeling well, his nose was running, and he wasn't himself. At this point Aiden chimed in, "I told you I was sick." The aide may have given me a sad look, or it may have been my self conscious imagination. I took him home and took his temperature. It registered at 100.7. Cue the mom guilt, please.This is the problem with the boy who cried wolf. How do you know when a wolf is legitimately lurking? Ironically enough, he hadn't complained of being sick that morning, although complaints of illness are usually a part of our morning routine. I could just picture the aide shaking her head and thinking, "These selfish mothers sending their kids to school sick just to get two hours of free time." Well, at least I am getting better about worrying what other people think of me.

As good ole Murphy's Law would have it, I had two appointments today and a meeting tomorrow morning. Doctors and dentists love when you cancel an appointment that you made a month ago at the last minute. The receptionists really love it, and they let you know their appreciation in a really passive aggressive manner.

"O-kayyyyy, so, Mrs. Clark..... Spell your last name again (so I know exactly who to curse when I am playing with my voodoo dolls tonight). Okay, so Mrs. Clark, you want to CANCEL your appointment for TOMORROW, is that correct?"

Yep, that's what I said.

"Would you like to reschedule at this time, or do you want to check your schedule and call us back?"

"I'll reschedule." Actually let me check and make sure no one else is scheduled to get sick. My two year old did drink out of his sick brother's cup.

To be honest, I am not that upset about missing the dentist today. I think I'll get over it. I would actually rather be stuck inside on the first 50 degree day in five months than go to the dentists. I would also rather walk on glass. By the way, the only thing dentists love more than cancelled appointments is people who put off going to the dentist for two years so that by the time they do they have really bad cavities. I am not sure who would do that.

"Hummm, Mrs. Clark I see you need some fillings. Did you know that it is highly important to come in for a regular dental exam every six months?"

Nope, never heard that before.

"Oh, wow, that is a long time ago. Can I be arrested for not keeping my dental health up to date? Are you sure? It might be worth a call to the authorities."

Everything is cancelled and rescheduled and it is still morning. When my kids get sick, which fortunately isn't that often, I have to remind myself how blessed I am to just be dealing with a garden variety virus. I know well the miracle of having healthy children and I can only imagine the pain and stress of caring for a chronically ill child. When we say our prayers at night we always pray for those who are sick and thank God for our health. When an inconvenient virus strikes it can be a good opportunity to remind us not to take our health for granted. That being said, being stuck in the house with sick kids can make for a long day. As my two year old keeps saying, "I want go bye bye car". Until you can go bye bye car (yes, I need some adult conversation) here is my own personal sick kid survival guide:

Throw screen time limits out the window. Your child just feels like laying around and that is probably the best thing for them. I usually stick pretty closely to the hour a day of TV but when illness strikes all bets are off. Huh, since when do we have the Disney channel?

Push fluids. With a fever, food is not that important, but keep pushing the water, juice, and smoothies on your kid. Avoid dairy products. Dairy and mucus are friends. For yourself, push the coffee. You are going to need it.

Hand sanitizer is your friend. I know there is a lot of information as to whether or not hand sanitizer is advisable, and germs are good. Those of you who know me know that I have a semi neurotic obsession with hand sanitizer. I am not going to give it up.

When necessary, don't be afraid to use pain relievers. I didn't say all natural. Your child might need some, too.

Remember, this too shall pass. Don't you love when people say that? Glad I could help. 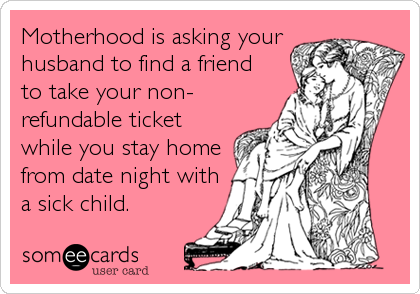